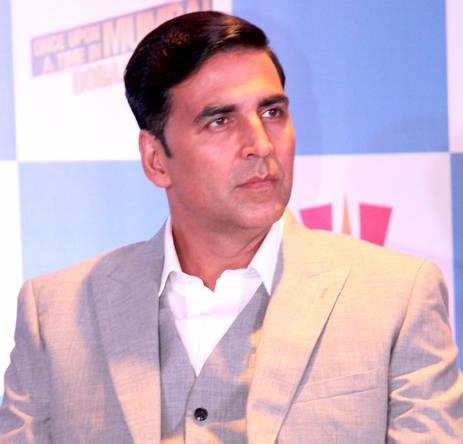 We have time & again told you all through our articles, how very few of the celebs are worth your respect. One of the biggest celebs who fall in the”cunning man who doesn’t deserve your respect” category is Akshay Kumar. Through our blind items we had informed you Akshay was pro peaceful relations with Pakistan during UPA regime & how he has become a right-wing nationalist since 2013, when he could feel the winds of change.

While one can’t be put behind bars, for being an opportunist, the crime that Twitter celeb Sameet Thakkar is hinting at is far more sinister & may end up destroying Akshay Kumar’s career.

Our regular readers will remember blind items about a superstar who paid off several crores off to an actress to stop her from outing him. The blind items also mentioned how a producer & the superstar’s wife were also involved in the deal. While we were fairly certain that the superstar in question was Akshay Kumar, the producer being Sajid Nadiadwala what we found trouble guessing was the name of the actress. None of our sources could find out who the actress in question was. If Sameet Thakkar is to be believed the actress in question was Aditi Rao Hydari.

Sameet Thakkar is a twitter celeb who is renowned for his information on political happenings. He has a huge following on Twitter thanks to exposes & knowledge about the behind the scenes political dramas. But he took his followers off guard when he tweeted about Akshay being a fake nationalist. This annoyed Akshay’s fans no end, who started attacking him. This infuriated Sameet, who ended up sharing the below tweet

Fans of Bollywood gossip can easily relate this tweet to the MeToo movement.

There have been rumors of Akshay Kumar’s manager Reshma Shetty diverting the anger of Sushant Singh Rajput’s fans towards Salman Khan. There have been rumors of Reshma Shetty using KRK in her grand plan as well. KRK attacks all celebs especially Salman day in & day out but never speaks ill about any of Reshma’s clients especially Akshay & Abhishek. But looks Reshma’s have gone awry thanks to Sameet Thakkar.

We think that Sameet is hinting that Akshay paid Aditi through producer Sajid Nadiadwala. What is more shocking is that the director of their movie Sajid Khan was sacked due to him being called out in the MeToo movement.

While it is unlikely that anything concrete might come out of this revelation, at least the public now knows how cunning & manipulative Bollywood celebs are. We hope you get to read this article before the tweet gets deleted!

Would anybody have heard about these dealings had it not been for blind items? Watch this space for our article in defence of blind items!