While dissent by film celebrities is acceptable and admired by some fans, Kashyap’s tweet raises an imperative question— has he gone too far with his frustration on the Modi Government?
By Rishi Kant Tue, 28 Jan 2020 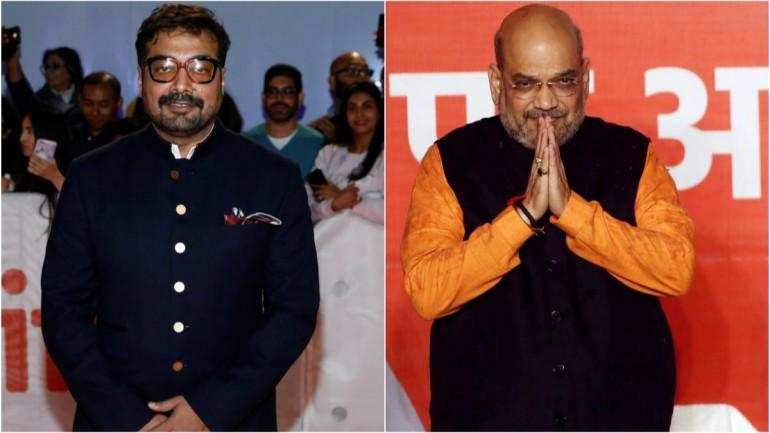 Anurag Kashyap has trended across Twitter and news recently following his controversial and questionable tweet about the Union Home Minister Amit Shah. While dissent by film celebrities is acceptable and admired by some fans, Kashyap’s tweet raises an imperative question— has he gone too far with his frustration on the Modi Government? Rishi Kant writes.

Ever since the enactment of the Citizenship Amendment Act (CAA) in the Parliament, the outrage in the country has been perpetuating. Eminent personalities encompassing all fields in the country stood in solidarity with the students of JNU and Jamia Milia Islamia, two institutes which have become the hotbed for dissent, with demonstrations, protests and sit-ins across India, whereas Shaheen Bagh has enshrined itself as the epicentre for all protests.

The situation continues to worsen in the country with both the sides indulging in clashes, some of it violent. However, most stalwarts in the film fraternity have chosen to stay silent on this issue, much to the annoyance to a sizeable population in India. There still exist a few names, who went ahead voicing their opinions— the coterie includes the likes of Nasseruddin Shah, Swara Bhasker and Anurag Kashyap.

But given both the seriousness and volatile nature of the political climate, even Bollywood celebrities could not prevent themselves from getting caught in the controversial tide. Recently, Nasseruddin Shah and Anupam Kher, flagbearers of two opposite ideologies, went too far by taking personal jibes at each other on a public forum. While the former called Kher a clown in an interview with The Wire, the latter replied by saying that Shah was under the influence of a substance. But the most recent addition to celebrities garnering attention out of a controversy is director Anurag Kashyap.

Kashyap has actively voiced his opinions on the policies of the Modi government, both online and offline. He was among 49 intellectual citizens in India who wrote to the PM about the alarming rate of mob lynching in India— where mostly Muslims and Dalits were targeted. He also took to Twitter when Article 370 was abrogated by the NDA in 2019. “You know what is scary, that one man thinks that he knows exactly what’s the right thing to do for the benefit of 1,200,000,000 people and has the access to the power to execute it,” said Kashyap in his tweet.

However, in August 2019, the celebrated director left Twitter after his family got threat calls for his tweets. “When your parents start to get calls and your daughter gets online threats you know that no one wants to talk. There isn’t going to be reason or rationale,” explained Kashyap as reported by India Today. He further went onto say that thuggery is going to be the new muscle power in the country. “Congratulations everyone on this new India and hope you all thrive. Wish you all the happiness and success. This would be my last tweet as I leave Twitter. When I won’t be allowed to speak my mind without fear, then I would rather not speak at all. Goodbye,” he added.

In December 2019, Kashyap was back on Twitter after the four-month hiatus with a tweet where he called out Modi’s second tenure as a fascist regime. “This has gone too far.. can’t stay silent any longer . This government is clearly fascist .. and it makes me angry to see voices that can actually make a difference stay quiet,” he said in a tweet. This was in response to the attack on the students of Jamia Milia Islamia and how brutally the “fascist” government avenged a peaceful protest by students.

Kashyap, albeit now has garnered much controversy surrounding him after a scornful tweet on Home Minister Amit Shah, where he called Shah an animal and the fact that “history” will spat on him. “Our home minister is such a coward. His police, his own hired criminals, his own army and yet he enhances his own security and gets unarmed protesters attacked. If anyone who’s crossed the limit of lowliness, it is Amit Shah. History will spit on this animal,” tweeted Kashyap.

The tweet was posted in light of an incident which happened during Shah’s campaign rally on 8th February, in run-up to the Delhi Legislative Assembly Elections, where a person who protested against the CAA was allegedly flogged by BJP supporters, while Shah did not do anything about the contemptuous act. Kashyap had earlier supported his colleague in the industry for her bravado act of visiting the JNU campus after students were mercilessly beaten up in their hostels at night by miscreants.

Earlier this month, Kashyap had posted a tweet condemning Narendra Modi and his decision to implement CAA. “CAA/CAB is not going to go anywhere. It is impossible for them to take anything back because it will be a defeat for them. This government sees everything as a win or loss. Their ego is such that everything will be burnt to ashes, But Modi can never be wrong. Why? Because illiterate people are like this,” tweeted Kashyap.

Kashyap was also seen at the August Kranti Maidan, supporting those out protesting against the brutalities against the Jamia students. “I cannot not talk. The prejudice that people had learned to live with has been empowered. Now it is being challenged, but it will remain. For it to totally go, we need to suffer. Political parties come in and try to hijack a movement. What they need to do is put themselves out there on the streets and make it a people’s movement. You have to do it the way Gandhi did,” he told India Today Television.

Anurag Kashyap is a decorated director and is best known for his magnum opus- The Gangs of Wasseypur films along with Black Friday and the Netflix original Sacred Games. His work, which somewhat teeters between mainstream and parallel cinema has brought him a lot of acclaim and a cult-like following among his fans.

Indeed, irrespective of how Shah is conceived by different people in India, calling out on a prominent political citizen of this country with such a remark is indeed condemnable. It could be even slanderous, in legal terms and can make up for a defamation case. Such a statement is unworthy of a man of his calibre.