Bollywood has lately seen a lot of patriotic films coming up on the silver-screen. It is interesting to see how
By Rishi Kant Fri, 24 Jan 2020 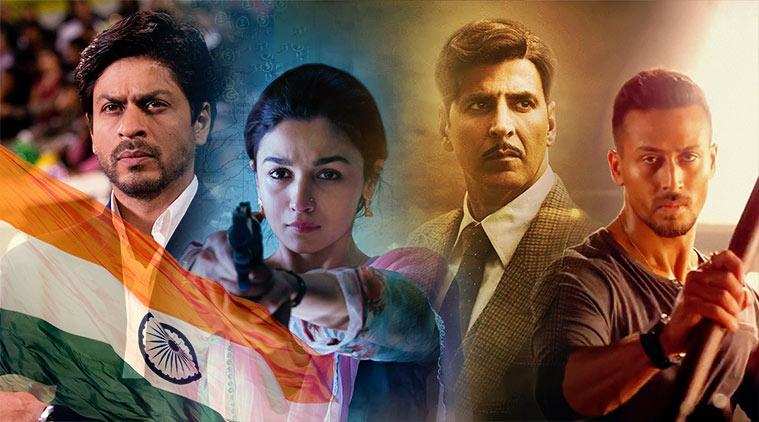 Bollywood has lately seen a lot of patriotic films coming up on the silver-screen. It is interesting to see how and why this growing trend has risen in recent years. Rishi Kant brings you an extensive analysis of this inextricable link between Bollywood and patriotism.

With the release of Tanhaji, Ajay Devgn hopped onto the bandwagon of actors doing films with a nationalistic flair to it. The state of affairs presently is that making a nationalistic or patriotic film is a calculated risk when it comes to box-office collection. Still, the industry is at the cusp of when every actor would jump at this opportunity. Devgn had earlier played the titular role in The Legend of Bhagat Singh in 2002. But at the time, the Indian audience was still longing for more coming-of-age, romantic, if not Karan Johar-esque films. Consequently, the film’s performance at the box office hardly reflected its critical success.

Presently, it is hard to imagine a time when doing a film which appealed to one’s patriotism was somewhat unconventional. A few films do stand out, however. Border (1997) and L.O.C. Kargil (2003), based on the 1971 Bangladesh Liberation War and the 1999 Operation Vijay in Kargil respectively, with its ensemble cast and massive budgets, had amassed equally impressive numbers at the box office. Gadar: Ek Prem Katha (2001), which was set during the Partition of India in 1947 and briefly touched upon the animosity felt by the inhabitants of the two nations did a phenomenal job for the producers commercially and could be considered as Sunny Deol’s magnum opus.

Rang De Basanti (2006), on the other hand, became one of the finest films produced in the 21st century, if not in the history of Bollywood. It had just about the right composition of a period film and a film which dealt with contemporary issues— a corrupt government and a disillusioned youth idolising the west. There aren’t enough superlatives to describe Rakeysh Omprakash Mehra making the present analogous with the past.

Nevertheless, Akshay Kumar, who not only pioneered the idea of injecting patriotism in his films, currently is the frontrunner in being associated with such films. A timeless actor, who has a reputation of shifting gears in his roles. He went from an archetypal macho-man with a signature bravado in the 90s to a hilarious and jovial character in the 2000s. His versatility as an actor is one of the reasons that his career has been a remarkable success. Hence, it is unsurprising to see his penchant for period dramas or depictions of heroic folklore.

Few of his films include Mission Mangal (2019), which is based on Indian Space Research Organisation’s (ISRO) first interplanetary expedition to Mars. It would be rough on him to call the film one disseminating propaganda, as it only embellished the efforts put in by India’s space research agency to put itself on the space map. It indeed leaves a feeling of pride to see India matching the achievements of the ‘superpower’ nations— the U.S.A. and Russia. What makes this achievement even more impressive is that India was Britain’s colony a little over sixty years ago.

A prime instance of bringing a valiant moment in India’s long and eventful history under the British rule in the limelight is Kesari (2019). The events of the film, albeit celebrated and known to the Sikh community, needed an appearance in mainstream Bollywood cinema, a need which was filled by Akshay. While most acts of bravery have been against the British Empire, much attention was garnered to watch the dramatic recreation of the utmost loyalty to the Empire.

But two of the most successful examples of patriotic films are Parmanu (2018) and Uri: The Surgical Strike (2019). John Abraham plays a passionate, nationalistic civil servant who wants to contribute to his nation, as his father served gallantly in the 1962 Indo-China War. The film showed the audacious resolute of a few government employees encompassing different arms of the administration, united by their love for the country. Their daunting spirit is present throughout the film, as they carry out preparations for a successful nuclear test, veiling it from the watchful eyes of America. John has also done a couple of other patriotic films, Satyamev Jayate (2018) and Batla House (2019).

Uri, on the other hand, is a fictional account of the vengeance to the Uri attack of 2016. It became one of the highest-grossing films in 2019. The attack on Uri was of great ignominy to the Indian diaspora, and it can be said that even a fictional, dramatic depiction to avenge the death of the Indian soldiers received an overwhelming response. The dynamic Vicky Kaushal, who is known for his compelling performances, donned the hat of an army officer. The war-cry, “How’s the Josh?” “High Sir!”, soon became a catchphrase.

There cannot be a definitive set of reasons to list out why such films are outperforming others. In a broader sense, the political and cultural dynamics of India went through a paradigm shift. Indians started to disassociate themselves from the west’s modus vivendi. It is part of a worldwide movement as a response to the growing trends of globalisation.

Cinema is one way to attain a more Indian flavour to life, to go back to the history books and relive some moments which enunciate the greatness of this nation. Be it directors, producers or actors, the film fraternity were able to sense this growing trend and did the needful. Consequently, more films appealing to the “proud” feeling of being an Indian, or the erstwhile Hindustan are releasing one after the other.

Although a period drama film is a very tricky subject in filmmaking in India, people are still thronging to watch Tanhaji. It deals with another revered yet unsung warrior of the past, Tanhaji Malusare, who was the military commander of Shivaji, a deity-like figure among the Maratha people. It has beaten the Deepika Padukone starrer Chapaak, which dealt with the contemporary issue of acid attacks on women in India.

It isn’t going to be long before every mainstream actor gets onto this bandwagon to a successful film, both commercially and critically. Maybe there could be remakes on the lives of freedom-fighters such as Bhagat Singh, Chandrashekar Azad. This trend is here to stay and will run its cycle until it is replaced by something new.