Searching is the latest thriller which has earned critical acclaim from critics & audiences alike. Is it worth a watch? Read our review to find out!
By theopinionatedindian Fri, 14 Sep 2018 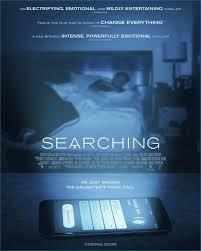 Searching released to rave reviews from audiences & critics alike. Is it worth the hype? Read our review to find out!

The movie starts off with the Kim family’s first PC. We are taken through the years of the Kim family through the eyes & screens of their various gadgets across the years. It is then revealed that David Kim’s(John Cho) wife died from cancer. David is now a widower raising his daughter – Margot single handedly.

It is shown that the father-daughter duo are close to each other. Margot & David keep messaging regularly. David has a brother who keeps dropping by. One fine day, Margot goes over to a friends place to study. She then calls her dad & informs him that she is extending her stay at her friends place & that he shouldn’t wait up for her. When David wakes up the next day, he finds out that Margot tried calling him several times. He intitialy thinks that she is at school, but finds out to his horror that she is not in school. Post speaking with her school & friends it dawns on him that his daughter is missing. He then calls the cops. Det. Rosemary Vick(Debra Messing) takes over the investigation. The search for his daughter reveals some hitherto unknown facts about his daughter. David realizes that he wasn’t as close to his daughter as he though he was. He probably barely knew her! But is she alive or dead? Did she run away or did someone kidnap or kill her? Why would she run away? What was she hiding from her father? These questions get answered in the last 10 mins of the movie

The movie revolves around the well known fact that parents have little idea about what their kids are up to. This despite them keeping tabs on them & staying in touch for most parts of the day. We couldn’t help but be impressed with the innovative way the movie has been shot. Most of the movie is played out through gadgets. The screens of the mobile phones, laptops & TV’s make up most part of the film. The movie will strike a chord with parents across the globe who feel they are disconnected with their kids despite advancements in technology. It will make them ask themselves, ” Do we know what is up in our their lives?”. Director Aneesh Chaganty has done a fabulous job of making a tight thriller. Indian audiences will be reminded of Sridevi starrer, Mom to an extent. John Cho of Harold & Kumar fame is good. Debra Messing gives a nuanced performance. She is completely believable as the detective who is pulling all stops to ensure that David’s daughter is found. The rest of the cast is good, but barely have much to do. The script is the real hero of the movie. There are enough twists & turns to keep you guessing. Just when you think all the queries have been answered, another twist is revealed. You will not know the truth till the end credits start rolling. We doubt whether anyone can guess the culprit till the end. It is not who you think it is!
The movie brilliantly captures the father-daugther bond. It also shows to what lengths a parent will go to ensure their ward’s safety. It is a story of triumph of human spirit.

It is after a long time that we were amazed by a film which boasts of no big star. The treatment, storytelling & premise makes it a must watch. Go watch it with your family!