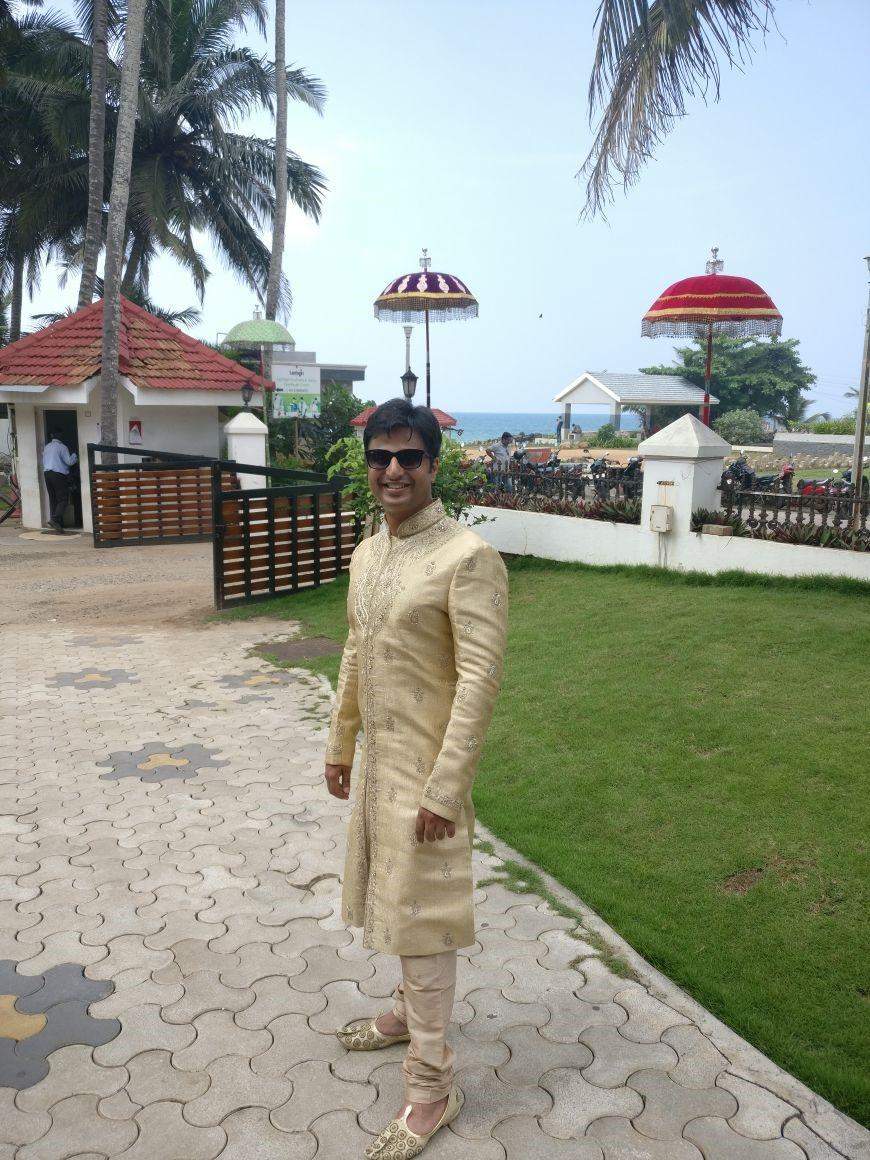 It is not everyday that you are invited for a destination wedding at a 5-star property. So we didn’t have to think much before deciding to go for the wedding at The Leela Kovalam, Kerala. We booked our tickets 4 months in advance on MakeMyTrip.com. We chose to fly Jet Airways. Luckily MakeMyTrip has got its house back in order & the process was smooth.

Day1: Check In & Mehendi
We got up early to board our 6.50AM Jet Airways flight from Mumbai to Thiruvananthapuram. We ubered it up to the international airport. The flight was bang on time. They served us cheese omelette, fruits, bread & coffee. The breakfast was decent. I loved the tamarind chocolate which they gave. The flight landed 10 mins before schedule. Post picking our bags, we hopped on to the bus our hosts via Akbar Travels had arranged for us to take us to our hotel. The Leela kovalam, is 30 mins away from the airport. On reaching the hotel we were greeted by the hotel staff, who applied vermillion, garlanded us & offered us some coconut water (best way to make visitors realize that they are in God’s country). Post picking up our keys from the reception, we proceeded to the restaurant – Terrace, to treat ourselves to some Masala Dosa. 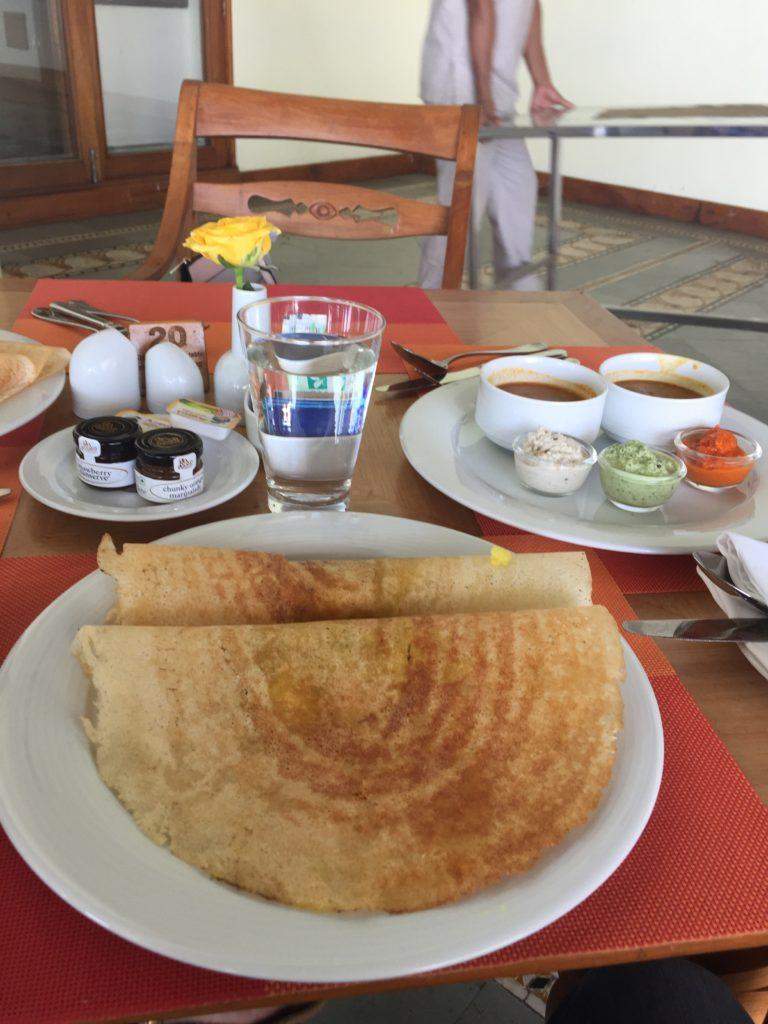 The dosa was crisp & tasty. We ordered some fruit juice to quench out thirst.
Post our breakfast, we headed to our room – which was a cottage. We were transported there by a buggy. The bell boys came shortly after us reaching our rooms & brought our luggage. The hotel room is well designed & is is made keeping Kairali architecture & design in mind. The bathroom was a bit of a letdown, as it did not have a bath tub. The room was spacious. It did have a TV, huge bed, wooden cupboard & a balcony with a porch. The wi-fi conection was weak at times. Post our afternoon siesta,we headed to the badminton courts. The badminton court is adjacent to a tennis court. We had to call for a buggy to get us to the court, as it is quite far from our room. The entire property is quite huge. The badminton court is made of mud. There was an attendant on court, who handed over the racket & shuttle cock.

After playing for 30 mins, we headed back to our hotel room, to get ready for the first event – Sufi Night.
I wore a white kurta, blue pyjama & topped it up with a blue jacket. The krta-pyjama costed around INR 4000. I had purchased it from Paaneri store in Dadar. I wore brown sandals for the event. Lastly before leaving for the venue, I wore Axe Signature deodorant perfume & Bvlgari perfume. Nothing adds to your confidence & allure like a good perfume does. The venue for the sufi night was just a 5min walk from our hotel room. The venue was open air & had bamboo huts to make it look exotic. There was an open bar & I helped myself to some Black Label whiskey. The fish finger & Malai Chicken Tikka served to us was yummy. The compere kept the mood lively & there were singers who performed for us. The dinner was served near the banquet hall. The buffet spread was excellent. Post a few drinks & dancing till 1AM at the banquet hall, we retired to our hotel rooms.


Day2: Haldi Ceremony & Sangeet
Post waking up the next morning we had had a hearty breakfast which consisted of chicken sausages, fruits, freshly made orange juice & some dessert. We then headed to the badminton court to burn some calories. Ater close to 30 mins of sweating on the court, we headed back to our hotel rooms to get ready for the haldi ceremony which was at Uday Samudra Hotel – which was a 5 min drive from our hotel. I wore a red kurta which had heavy embroidery & zari work. I had purchased it from Amarsons store in Mumbai for INR 4500.I wore blue denims & brown sandals along with it. Since it was a day event, I relied on my trusted raybans which cost approx INR 4000 & Garnier sun screen SPF15 moisturizer to save me from the sun. I remembered to generously wear my deo-perfume combo to not end up stinking under the humid conditions prevalent in Kovalam.
Akbar Travels had arranged a car to take us to the Haldi venue. On entering the hotel, we were directed towards the venue. The poolside area was decked up for the haldi ceremony. They had arranged for coconuts counter for the guests. The coconut sizes were the biggest I have seen. They were almost twice the size of regular coconuts. The white cream was delicious & filling. The couple entered amidst much fanfare on a flower bedecked bicycle. I did indulge my wife by posing for some romantic pics with the props available.
Post a few hours the rain dance commenced & the pool was thrown open to the guests for a pool party. Guests helped themselves to their choice of alcohol. After a few hours of revelry, we helped us to the lunch buffet. The buffet menu was extensive & the desserts were to die for. We then took a car back to our hotel room.
It was only later on in the day, that I would realize that the caterers had added a lot of soda in the food, which ended up making me feel uneasy later on. Post an afternoon siesta, we woke up to get ready for the sangeet. But we did head to the infinity pool next to the restaurant for a swim. The pool is huge, well maintained & was very quiet. Barring a few foreigners who were sitting on beach beds by the poolside, getting themselves tanned there were no people around. Post swimming for 30 mins we headed back to our room. The property boasts of three swimming pools, out of which two are infinity pools. As the sangeet ceremony was expected to start a bit later in the evening, we book an uber to take us to Padmanabhaswamy Temple. Only Hindu men wearing a dhoti & women wearing a saree are allowed to enter the temple. There was a store run by the temple nearby, from where we bought our dhotis for INR 60 & entered the temple. While I am not a very religious person. I have been to my share of temples, but nothing prepares you for the magnificence of the Lord Padmanabhaswamy idol, which is huge & several parts is made of pure gold. The doors are made of pure gold. Unfortunately photography inside the temple is prohibited!
I wore a red kurta & white pyajama purchased from a store in Santacruz West for INR 3000. I wore golden mojris purchased from a street side store on Linking Road, Bandra for INR 300.
The sangeet was at the banquet hall. We were treated to some dance performances by the bride & groom’s friends & relatives. The bar had a wide array of alcohol brands. I helped myself to a few pegs of whiskey. we were served some fish & chicken starters during the ceremony. The dinner buffet was thrown open a little later. I tried hard to restrict my food intake, but eneded up bingeing on the Indian & Continental fare. The jalebis, gulab jamuns & tarts were to die for. I was enjoying the food at The Leela way more as compared to the fare served at Uday Samudra, mainly because no soda was used while cooking at The Leela. Post dinner, we were exhorted by the hosts to dance & drink till we dropped. I then waited for a buggy to take me to my hotel room & called it a night.