After Losing One Of Their Twins, They’re Struggling To Save The Other

He may lose his child the 4th time. Your donation might help him save his 4th child & fulfill his dream of becoming a father!
By theopinionatedindian Tue, 28 Nov 2017 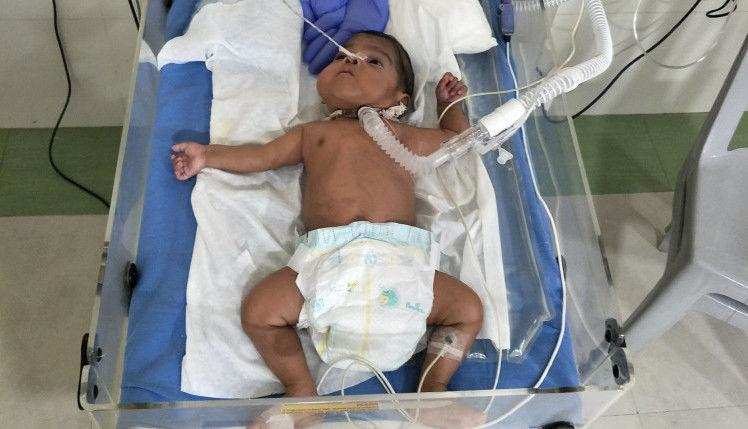 After 3 heartbreaking miscarriages, my wife and I were blessed with twins on November 8, 2016. Our prayers were finally answered. But tragically, she delivered in the 24.3 week of her pregnancy because of which our babies were extremely premature and underdeveloped. After a month, I relived the pain of losing my child all over again, as one of my babies breathed his last.

Fate forced me to bid farewell to all my children so far. I’ve decided to name my son Veera because he’s a fighter, he’s the only one who survived and didn’t abandon me. He has also given my wife and I the strength to fight this indescribable battle. It’s been one whole year since my child came into our lives and all he’s seen is the four glass walls of the NICU (Neonatal Intensive Care Unit). He’s been breathing with the support of a ventilator – he’s a brave baby, this one. I want to take my son home and relieve him from the hospital. But it’s not so easy, I would need an oxygen concentrator, a 24*7 nursing support and a few oxygen cylinders to keep my baby alive. And all of this comes at a staggering Rs. 7,20,000. I’ve been longing to free him from this prison he’s found in the hospital. With your help in the form of donations, I can finally take my son home.

My name is Yogesh Khanna. I work at Tata Consultancy Services and make Rs. 28,000 every month. I live in Chennai with my wife and my parents. I’ve always believed that when God shuts one door, he opens another. That’s why even after seeing such difficult times in life, I haven’t given up. My wife and I have wanted a child for too long – we’ve wanted it too badly. So we decided to leave no stone unturned.

I hate talking about how much money I’ve spent on my babies, somehow displaying the amount of money I’ve spent to keep my child alive doesn’t feel right. That’s the reason I’ve avoided it all this while. I’ve sold every piece of jewelry we had, exhausted my savings and exhausted three loans from the bank to pay the bills so far. I had even applied for one more that did not get through. And now I have absolutely nothing left and I think if I’m asking for your help, you deserve to know my story and my helplessness.

I’ve spent Rs. 12 lakh on the baby that I never got a chance to meet or even hold. I’ve spent Rs. 53 lakh on Veera. Every day that Veera spent in the NICU has costed me Rs. 15,000. Veera’s lungs are underdeveloped. The month in which he was delivered is crucial for the baby’s lung development. That’s why the support he needs is higher as compared to normal babies. Once we take Veera home, for at least six months, we’ll have to buy a machine called the oxygen concentrator that costs about Rs. 2 lakh. We cannot afford to pay for this machine so we’re planning to rent one at Rs. 18,000 per month. Every 4 hours, Veera needs suction – this is something that can be performed only by a nurse, so we’ll also have to pay for her services at Rs. 50,000 per month. Additionally, we need to purchase oxygen cylinders and have two back up ones because these are going to keep my baby breathing and alive. The doctors advised us to stay around the hospital in case of emergencies but the rent in that area is as high as Rs. 30,000. According to them, if we feel there’s anything wrong with Veera – we have to get assistance in the next 10 minutes – if there’s any more delay, it could cost us his life. And if that happens, I don’t think I’ll have the strength or courage to fight for anything, ever again. Your help can save our family from this irreparable loss.
Every person we know, including our parents, asked us to give up on the child looking at the unforgiving numbers on the medical bills but I went against all of them. Today, Veera is 5.5 kg from just 740 grams. He’s given me his support so far and now I have to win this final stage of my battle. As his first birthday gift, I want to take him to the comfort of our home and take care of him. If you’re still reading this story and think my baby deserves this chance at life, please help me give him this birthday gift – I’ll be indebted forever.

You can help Yogesh by donating to his fundraiser on Ketto here.