Why Modi Is Invincible

As exit polls indicate a clear majority or a hung assembly with BJP emerging as the single largest party, we analyze the reasons behind PM Modi's invincibility.
By theopinionatedindian Sun, 13 May 2018 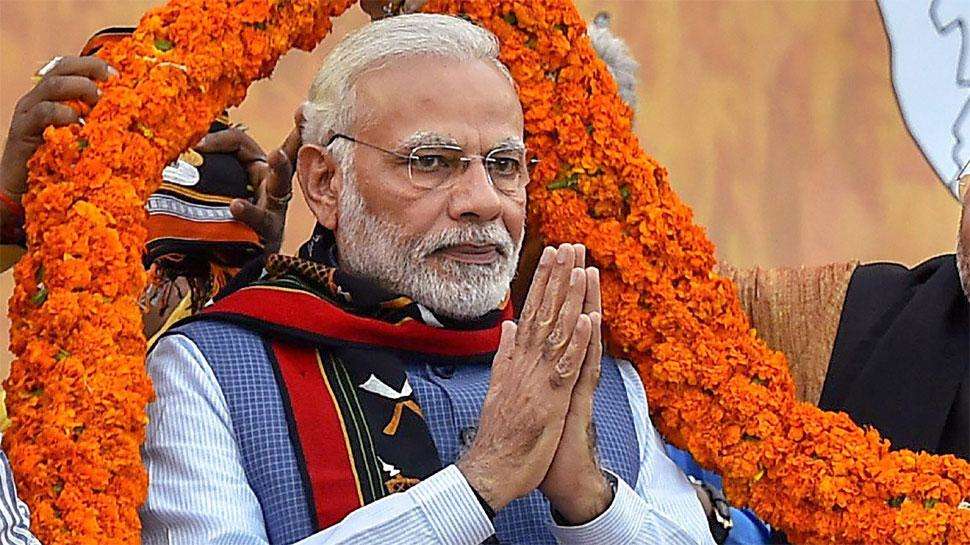 A journo, who is better known for her page3 related articles & dislike for Modi has published an article about why Rahul Gandhi won’t make a bad PM. She goes on to say that people are unhappy with Modi for a variety of reasons & that Modi will have a tough time winning the 2019 general elections. On the same page a well renowned novelist speaks about the hiccups faced by Modi government in ensuring progress & “acche din” for the masses.

Be it any news channel or print publication or news portals, none will admit that Modi winning the elections next year is a foregone conclusion. The reason is simple – No one likes watching a one horse race. If TV channels admit that Modi is winning next year, their TRP’s will drop. If news publications publish that Modi faces no competition, subscription will suffer & the same applies for online portals.

Politics is opium for the masses & for profit media organisations want to milk this money making obsession. They all will shy away from admitting one glaring truth – That Modi is Invincible.

By the time most of you read this article, Karnataka will have turned saffron. As most exit polls predict either a hung assembly or a clear majority for the BJP. Just one exit poll gave INC a clear majority. Unless Congress doesn’t get a clear majority, Shah will be calling up Deve Gowda on 15th if required to stitch a coalition. These events will be in sharp contrast to early opinion polls which predicted a smooth sailing for the Siddharamaiah led Congress in Karnataka. Which makes us ask – What Makes Modi Invincible?

On a TV talk show in 2014, attended by the then CM of Gujarat – Narendra Modi, he was asked by the promoter & show host of the news channel – “There are allegations that you exaggerate your achievements. That ground realities are in stark contrast to what you claim”. To which the CM calmly replied “If that is true, then why do the voters of Gujarat keep voting for my party? Forget state elections, we don’t even lose gram panchayat elections. Gujarat ke nagrik toh mera kaam dekh sakte hain naa? This quote sums up the reason for Modi’s invincibility.

A 65 year old relative once told me ” In my lifetime, I have never seen a PM like Narendra Modi”. Never has a PM done so much for the people in such a short span of time. The list of PM Modi’s reforms in endless. Direct Benefit Transfer(DBT), RERA, GST, Demonetization, Aadhar linkage, Surgical Strikes, LPG, Rural Electrification, War on black money, war on corruption, Awas Yojana etc all have struck a chord with the masses. His critics pan him for the lacklustre execution of GST & Demonetization(click here to read our article on the Demonetization debate). Companies who employ qualified professionals face several roadblocks & issues while rolling out apps or services for 10-20 million users. GST, Aaadhar linkage etc have to be rolled out for 300-400 million users! So one can imagine the scale & issues one will face. Hence they government deserves to be pardoned for these execution issues. How many schemes of MMS led UPA govt. can you think of apart from MNREGA, Civial Nuclear Bill, Land Bill?

Most of his critics, & quite a few of even those who voted for Modi in 2014 were expecting that he will not fulfill all his promises.

After all when was the last time a PM candidate actually did something concrete to wipe out corruption, poverty, terrorism, black money? Indians were used to PM candidates providing just lip service & then not walking the talk. Several of Modi’s supporters have turned against him for this reason – He actually did something to eradicate black money & corruption. There were several supporters who reaped the benefits of corruption, red tapism & low tax compliance of Congress era. They did not want things to actually change. They wanted other corrupt people to be put behind bars & their business to continue unabated. But demonetization, GST & Aadhar has put a spanner in their works. One of Modi’s ardent fans turned critic is my neighbour who had a thriving business of securing admissions for students in top colleges through the donation route. His cut was fixed at 15% of the total donation amount. He made a good 1-2L every year during admission season. All of this money was paid in cash & was unaccounted. But as luck would have it, post demonetization he had to pay 20% to his house maid to deposit his money in her bank account!All of his black money was wiped out. The same holds true for several traders & small retailers across the country who never gave a receipt for their goods sold & under reported their income. The muslim community which dealt mainly in cash was the worst hit due to demonetization.

Yes. Corruption & black money continue to exist two years demonetization, GST. But tax compliance has increased. Direct tax collections have gone up by 15%. The number of tax filers has gone up by 15%. People are scared of stashing money at home. The number of IT raids across the country has increased. The extra money generated, will now be used to fund infra schemes, which will benefit the entire country. This unlike Congress era, when retailers, traders, businessmen – which forms a small segment of the entire population benefited.

Thanks to PM Modi’s reforms push, India is no longer a part of the fragile 5 economies. Infact it is the fastest growing major economy in the world. Despite what critics might want you to believe, job generation is at an all time high. Due to the start up ecosystem & mudra loans several citizens are now able to fulfill their dreams of starting their own business. Inflation is at an all time low. Gross deficit has been maintained at 3.5%. India has jumped 42 places on ease of business rankings & is expected to improve their rankings further this year. The only challenege PM Modi faces is crude oil prices, which are going up at an alarming rate.

Muslims & christian missionaries who were given a free hand under Congress regime are now kept under check. Gone are the days when a christian evangelist could convert several thousands of rural population in backward states. Gone are the days when Bangladeshis could illegally enter India & become legal residents thanks to the vote bank politics of secular parties. Hardcore muslims fear that several regressive customs like triple talaq, nikaah halala, polygamy will be stopped. The fact that triple talaq has been banned in muslim countries like Pakistan, Bangladesh, Indonesia etc is lost on them. Thus they are crying intolerance. They continue to rant against the PM in their living rooms, on social media & even on TV channels but to no avail. The fact remains that they enjoy a great amount of religious & personal freedom. Their fears of being forced to convert to hinduism haven’t come true. But beef ban & their inability to convert more people to their fold has riled them up. Ghar wapasi has gained momentum. Several converts are now being brought back to hinduism.

This hasn’t gone down well the mullahs & archbishopss, who are now asking minorities to vote en-masse for the Congress.

The biggest change thanks to Modi, is politicians embracing Hindutva like never before. All the top politicians including Rahul Gandhi now are forced to make a pit stop at local temples. Gone are the days of politicians going only to dargahs, mosques, churches & gurudwaras to garner votes. They know that Modi’s hindutva image is one of his biggest strengths & that the hindus have united against the Congress. Congress & other secular parties are now seen as anti-hindu. A politician can no longer be partial only to the minorities. Mamata Bannerjee too was seen embracing her hindu roots, years after shamelessly pandering to muslim votes.

Most of Modi’s critics will argue that he is more of a marketer than a reformer. Nothing could be further from the truth. It is like saying that apple products continue to be in great demand only thanks to their marketing gimmicks. Would you buy a phone for INR 1L, only because of good marketing? Never. If it were true then every company would stop spending money on R&D, manufacturing, design, efficiency etc & spend solely on marketing. An average cell phone buyer too reads reviews, compares the phone’s features & price before buying it. The same holds true for PM Modi as well.

Thanks to his several reforms, PM Modi not only enjoys tremendous goodwill but also a lot of things to market to the masses. His habit of honoring a majority of his commitments & sharing his vision has earned him the respect of the people. This is in sharp contrast to opposition party leaders who have no vision or solutions to the problems ailing the public. Their mediocre track record makes their promises fall on deaf ears.

But Yes, it is true that PM Modi & Amit Shah are marketing geniuses. They are experts at making their message reach the masses. This combined with legions of PM Modi’s bhakts, ensure that every individual is aware of PM Modi’s achievements. The recent marketing blitzkrieg is testament to this fact.

PM Modi is truly blessed. Just like Indira Gandhi who faced no real challenge from the opposition, in terms of a strong charismatic leader, Modi too has no real challenger. Truth be told The Modi-Shah combine could give any leader a run for his/her money. While Indira Gandhi lost twice, Modi has never lost an election fought under his name. Be it his own partymen like LK Advani, Murli Manohar Joshi, Shanker Singh Vaghela all have been decimated by the Modi-Shah juggernaut.

Rahul Gandhi is unfit to be a PM.He has strengths apart from his surname to speak of. He gets ridiculed for his gaffes. But even other dynasts like Jyotiraditya Scindia too would have met the same fate had they contested against PM Modi. PM Modi is like the Pete Sampras of his era. Just like the tennis legend, all of PM Modi’s rivals appear mediocre when compared to him. Be it Akhilesh Yadav, or Tejaswi Yadav or Rahul Gandhi all pale in comparison to PM Modi.

All these factors combined with the PM Modi’s austere ways, legends of him working tirelessly, not a single corruption taint against him or his family & his family continuing to live a frugal existence have helped create a god like aura around PM Modi. India still has a long way to go in terms of development, poverty eradication, health, literacy etc. But people are aware that drastic development doesn’t happen overnight & that no one is better equipped to get India there than PM Modi.

For my grandfather’s generation, India’s favourite Gujarati was Mahatma Gandhi. But for my generation & my father’s it is Narendra Damodardas Modi!