The Most Lovable Child Artistes Of Bollywood

When attractive children are cast in Bollywood films, the results are always pleasing. They may be playing the part of Cupid, bringing broken hearts back together. They may be showcasing a rare disease in order to gain sympathy. They may be delivering comedic interludes to lighten the mood. Alternatively, they may be pursuing their basic yet profound dreams, despite parental interference, poverty, and other obstacles. Whatever role they play, they provide comfort to our hearts. It's difficult to fathom how such small children will memorise such long dialogues, deliver such perfect gestures, and emote with such feeling and comprehension.

Many of our famous social films and family dramas from the 1950s, 1960s, 1970s, and 1980s featured them. Pyaar Ki Pyaas centred around Honey Irani, Nanha Farishta had Baby Rani in the title character, Mastana was around ‘wonder child Bobby,' Boot Polish was concerning Baby Naaz and Master Ratan, Do Kaliyan had Baby Sonia in an iconic double role, Majhli Didi had Master Sachin in a prominent role. Recently in Bajrangi Bhaijan, Harshaali Malhotra left us awed by her amazing jaw dropping performance.

To be honest, there are so many fantastic performances by different child actors in a variety of films that listing them all at once is a difficult job. This is simply an attempt to highlight some exceptional acts that are among favourite ones: 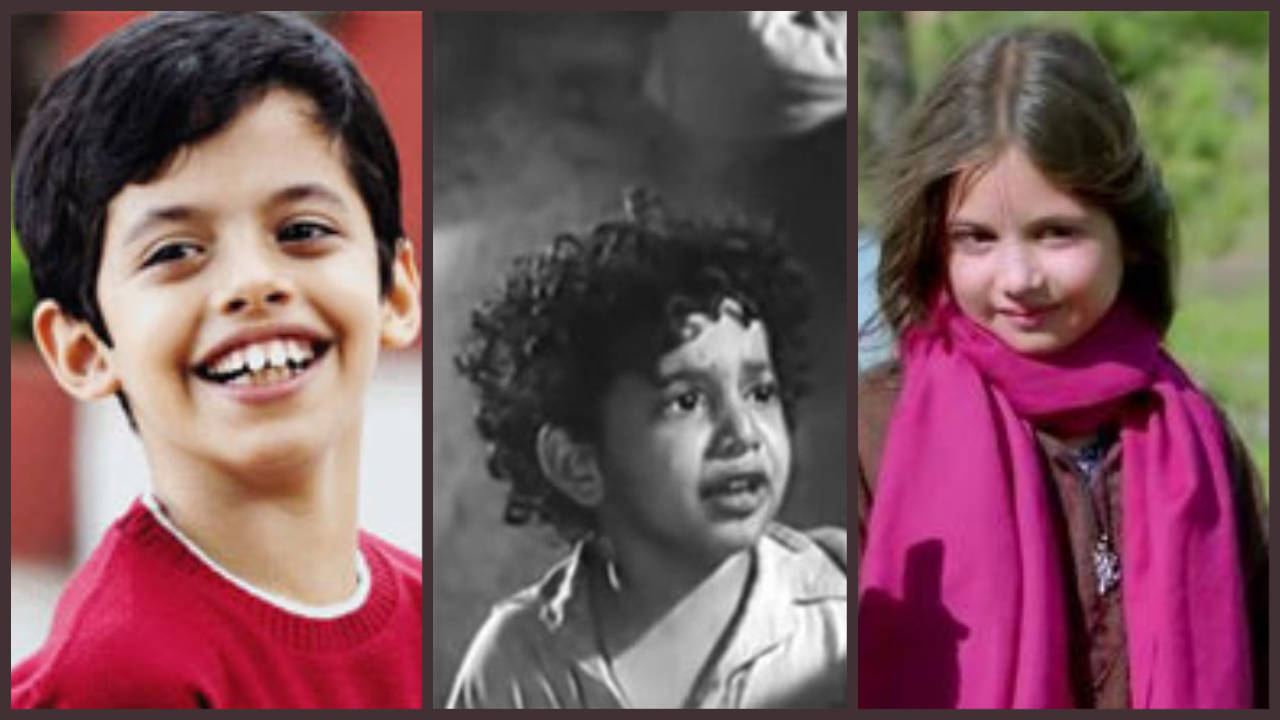 Raj Kapoor is said to have chased down at least twelve Mumbai schools before settling on Baby Naaz to play the lead role, and what a pick she was! Her excellent performance as a little orphan slum girl who is abused by her aunt is heartbreaking and has since become a classic. Master Ratan, who plays her older brother, also gives a fantastic score.

This is a rather rare film in which Ashok Kumar and Daisy Irani play the main characters. In the film, Daisy Irani plays a young boy who, after a chance encounter with Ashok Kumar in a park one evening, refuses to leave him because he believes Ashok Kumar is his father. On the other hand, Ashok does everything he can to dump him and get rid of him, which leads to a number of amusing and poignant confrontation scenes between them. In a small but light-hearted role, Meena Kumari shines. Daisy Irani is clearly brilliant in the film and gives legendary Ashok Kumar an equal ‘takkar'.

Both sisters play the roles of boys who are friends in this Chandulal Shah production. Honey loses his mother because his father beats her every day, while Daisy Irani is wealthy and has a stepmother. Both of them set out in search of God, pleading with him to return Honey's mother to them. Following that, the film primarily focuses on the numerous events that occur during their eventful journey. Both of them deliver an excellent result.

Honey Irani portrays a young orphan girl who is adopted by a couple who are childless. For the little girl, life is briefly like a fantasy, but trouble arises when the mother gives birth to her own child, after which Honey Irani is entirely overlooked. Her performance is outstanding, and the character leaves a lasting impact on the viewer.

This is the Hindi remake of the Tamil film Kalathoor Kannamma, in which superstar Kamal Haasan made his film debut when he was just four years old. So, there you have it! Master Babloo was cast as a child actor in the Hindi version, and his performance was simply outstanding. He outperformed all of his adult co-stars, including Sunil Dutt, Meena Kumari, Nana Palsikar, Raj Mehra, and others, in terms of natural expressions and dialogue delivery.

Director Hrishikesh Mukherjee is able to elicit an incredibly brilliant performance from Master Sachin, who is still very young. The child in the film first loses his mother painfully, and then is abused by his step-sister, Lailta Pawar (in one of her most venomous screen avatars ever). His yearning for maternal affection, as well as his special relationship with Meena Kumari (who plays the title role), tugs at our hearts and serves as the film's central theme.

I recall watching this film on the big screen when I was very young, and it had such an effect on me that it is still one of my favourite films and, in my opinion, one of the best children's films ever made. Baby Sonia (Neetu Singh) shines in a dual role, bringing out the subtle differences in the two sisters' demeanour and mannerism. After their parents' divorce, one of them grows up with the father and the other with the mother. They clash a lot in school at first, but eventually become friends and decide to swap places so they can get to know the other parent and feel the love they've been lacking.

The Prince and the Pauper is a colourful costume drama based on Mark Twain's novel. Two identical twins are born on the same day and at the same time, but to separate families – one is a prince, and the other is a peasant. They meet by chance and plan to embark on an adventure by swapping places. In both roles, Master Mahesh is a joy to watch and gives a heartfelt performance.

Darsheel Saffrey, who plays the role of a dyslexic child, gives a heartfelt and brilliant performance. His subtle variations in his movements are outstanding, and he will continue to play one of the most difficult roles written for a child actor.

This youngster is so assured in the film that he makes Superstar Amitabh Bachchan seem insignificant. His dialogue delivery is normal, and he gets to say some hilarious one-liners. The child in the film is unaware that Amitabh is a ghost and treats him as if he were a magician pal, and their scenes together are fantastic. It's admirable how this young child actor is untouched by the presence of such a towering actor as Amitabh Bachchan…

She gives an excellent performance as the mute girl who is separated from her mother by chance and left behind in a new world. Her facial expressions ranged from helplessness and apprehension to joy and enthusiasm, demonstrating the depth of this young girl's talent. Sharing screen space with Salman Khan and Nawazuddin Siddiqui and yet managing to steal the show without saying a single line of dialogue is no small feat.

Whether it's a high-budget movie with big stars or a low-budget children's movie, they still leave a lasting impression in the roles they play. Hats off to all of the authors and directors who provided them with enough opportunities to demonstrate their abilities, which is why each of them is remembered to this day for their excellent work...