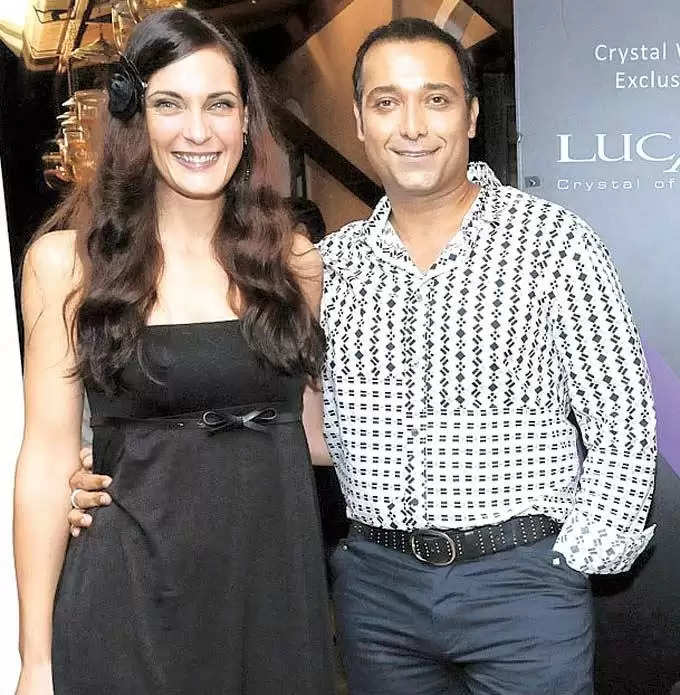 In a historical first for Croatia, the country witnessed their first ever and most elegant Hindu-Croatian wedding on October 14th 2011, when the dashing film actor Purru Raaj Kumar (son of the legendary Raaj Kumar) wed his lady love of seven years, the stunning Croatian model Koraljika Grdak, in grand style and ceremony in picturesque Zagreb.  The union of Purru and Kora was of monumental and national importance to the locals, who were completely mesmerized during the three days of festivities and rituals.

The Baraatis numbered nearly 40 of Purru’s closest  friends and family from India, who were all overjoyed to be part of his big day.  Housed at the classy Regent Esplanade, a string of parties celebrating the couple welcomed the guests.  The elegant, luxurious hotel built in 1925 has been a host to many celebrities and VVIPs over the years including Orson Welles, Louis Armstrong, Woody Allen, Josephine Baker, and a host of top political leaders, Prime Ministers and Presidents from around the globe.

Purru and Kora have been together since their initial meeting seven years ago in the lobby of the Marriott in Mumbai.  Despite the fact the couple met in Mumbai, the two preferred to get married in the intimate and romantic atmosphere in Koraljika’s hometown of Zagreb.  Like many others, Kora had initially come to India to explore Indian culture and spirituality.  The statuesque, blue-eyed beauty was soon inundated with modeling assignments in Mumbai, but destiny took over soon enough, and she met her Prince Charming – Purru!

“When we met, I had feeling like we know each other forever. It wasn’t love at first sight, there was no crazy heart beating… we just started talking and we didn’t stop.”

It was only after Kora had returned to Zagreb that Purru realized that he felt more than just friendship towards the gentle, independent, and intelligent Kora, with her contagious laugh and sea-blue eyes.  In true Bollywood-style, our hero flew to Zagreb and opened his heart to his lady-love!  Unlike the reel world where obstacles would then face the lovebirds, Purru joyously realized that his love was reciprocated!  And so, began their love story!

On his first visit to Croatia, Purru felt the same that Koraljika felt towards his homeland: respect and unbelievable warmth, like he had come home. Her parents were charmed with the combination of humor and polished manners exhibited by Purru, though her dad took some time to come round to the fact that his little girl was now in love with this mysterious lad from across the seven seas.

Today, Purru is a much doted on son- in-law.  Similarly, Purru’s mother Gayatri, simply adores the girl that took her son’s heart by storm! Purru spent his first Christmas and New Year as a married man in the land of his in-laws, with his new Bride.  It will be March before Gayatri will be able to welcome her Croatian daughter-in law officially.  Purru will then be able to carry her across the threshold of their home in Mumbai.

We wish Purru and Kora all the best for their marriage and wish them many years of happiness and love together.  Also, thank you to the couple for sharing their intimate moments and pictures with our readers.  Check out these exclusive pics from the celebrations!

14th October, at the Gothic 13th Century St.Mark’s Church, Purru and Kora pledged their wedding vows, in the church where five generations of Kora’s family have been married.  Kora wore a gown exclusively designed by Envy Room, the most renowned designers in Croatia.  Purru was garbed in a custom-made tuxedo.  The wedding vows were made in flawless Croatian, the basics of which Purru learned from Koraljika.  The interior of the Church was entirely done up with flowers.  As per Croatian tradition, both the National Flags (of India and Croatia) were tied together masted in front of the wedding car, as the newly weds traveled to the reception venue.  The post-church wedding reception was held at the Okrugljak, an exclusive, traditional Croatian 100 year old, Sistine-styled restaurant, situated on the slopes of the mountain called Medvednica.  This picturesque location had beautiful coniferous trees, gardens and rivers, all adding to the romantic mood of the event. Okrugljak, for the occasion, had combined with Croatian gourmet specialties, pure vegetarian meals for the Indians who didn’t eat meat.

The traditional Mehndi ceremony, on the 15th Oct., was unlike anything seen by the Croatians ever and took place in a dream venue.  The location Jarunski Dvori, nestled by the picturesque and beautiful lake Jarun is known for its fine dining and exclusively crafted menu. The Croatian women delighted in the henna.  There was sangeet and dancing by the reveling baraatis to desi music.

On 16th Oct., the Hindu wedding ceremony, as well as the reception were held at the Castle Gjalski. The red roof of this historic 200 year old Manor shows through the treetops of tall poplars, mighty chestnuts, and imposing spruces and firs as the wind sways their branches. It has lent its name to the surrounding villages and the castle has been a residence of noblemen and advisors to the Kingdom of Croatia. Ksaver Šandor Đalski -the famous Croatian writer was born here in 1854.

For the Hindu ceremony- the ‘mandap’ was erected on the ‘lawns’ or terrace of the castle, and The Raaj Kumar’s family priest Anshuman Dwivedi presided over the rituals. He had been specially flown in to Zagreb along with the rest of Purru’s family. Koraljika wore for the Hindu ceremony, a Lehenga choli, hand made by Mumbai craftsmen for traditional clothes, with lots of silk threadwork and zardosi and precious stones studded  on the veil and dupatta. Purru wore a unique Sherwani, again created in Mumbai. The underground Ballroom of the castle served as the venue for the reception.