Are Alia And Ranbir Getting Married in December 2020?

Are Alia and Ranbir getting married? if yes, then what are their wedding plans? what does the invitation look like? Read our article by Purvi to find out more!
By purvi b Tue, 11 Feb 2020 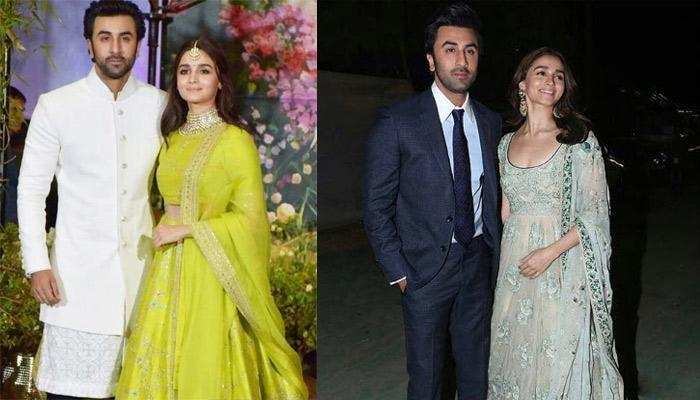 Are Alia and Ranbir getting married in December? If yes, then what are their wedding plans? Read our article by Purvi to find out more!

Let us first know where this love story began. Like most things in Bollywood, this was first discussed on ‘Koffee with Karan’. Alia Bhatt confessed about her crush on Ranbir Kapoor, she talked about the phone call that Karan Johar made to Ranbir after the release of Rockstar and asked Alia to talk to him and tell him how she loves him. All Alia did was talked non- stop and he said, ‘that very nice Alia.’ She said he is adorable and that she would marry him. There is something irresistible about Ranbir that he has never been short of girlfriends. With his charm, acting skills, chocolate boy looks he has girls screaming for him. There was a phase when he was called to be a playboy. He has dated or was linked with many women starting from Avantika Malik, Nandita Mahtani, Priyanka Chopra, Sonam Kapoor, Deepika Padukone, Katrina Kaif, Nargis Fakhri, Angela Jonsson, Ameesha Patel, Shruti Hassan, to Mahira Khan. This is a long list and that Ranbir had a story with each of them. Next Alia and Ranbir struck on the sets of Ayan Mukerji’s Brahmastra in Bulgaria and they were rumoured to be dating. But they made it official only when they made their first appearance together at Sonam Kapoor and Anand Ahuja’s reception in May 2018. Then Ranbir went on record in a GQ interview and confirmed the relationship. Last year, at an award show Alia Bhatt declared her love for boyfriend Ranbir Kapoor. She received the best actress award for the film ‘Raazi’ and had loving words for Ranbir in her thank-you speech. She said

Meghna, for me, Raazi is you, your blood and sweat. You are my main chick. Vicky, without you, the film wouldn’t be complete. Thank you, my mentor, Karan for being my mentor, father and my fashion police. Tonight is all about love; there, my special one, I love you Ranbir.

These words of Alia clearly described her feeling for Ranbir and that it was something special and long-lasting. The way Ranbir and Alia look at each other proves how much they love each other. Both the families approve to the relationship. They one of the most adorable and cute couples of Bollywood the paparazzi can’t get enough of them ever.

Earlier in an interview, Alia Bhatt disagreed to the reports of her wedding. She said, ‘I’m too young to think about it. When I feel there’s no need to be in a strong bond with him, we will come to it. But right now, I am married to my work and I also have my relationship going well on the side.’ Ranbir and Alia have attended many marriages together. Recently, Alia was seen with Ranbir and Neetu Kapoor in the wedding reception of Ranbir’s cousin Armaan Jain. They arrive together and posed for pictures, Alia was seen to be protective about Neetu Kapoor in the videos which came from the celebrations. Before this Alia flew to Delhi with Ranbir and Neetu Kapoor to accompany Rishi Kapoor who was in the hospital undergoing treatment for an infection. According to some sources, Alia-Ranbir’s wedding date has come out, it is reported that they are going to tie the knot at the end of this year on 18 December 2020. It is reported that the wedding will be in Mumbai and all the rituals will be held in the houses of both the families. The after wedding parties will be organized in 5-star hotels in Mumbai. Though when Alia’s mother Soni Razdan was asked about the wedding plan she said,

it is a baseless rumour

However, many feel it could be true and happening this time. And if it’s true then both Ranbir and Alia had failed relationships before so maybe this is the reason of them taking this relationship to the next level.
They have been together for almost two years and there have been many news reports about their marriage. According to Rajeev Masand, their upcoming movie ‘Brahmastra’ will be released on 4 December 2020 and after that, they will get married. In his column for a magazine, the journalist revealed that Alia and Ranbir have agreed for a wedding. The preparations have begun and that the families are asked to mark off days to join the Kapoors and Bhatts in the celebration. Rajeev Masand also mentioned that Alia is still too young to get married but there’s nothing wrong in it and that actresses don’t mind getting married as nowadays it doesn’t mean that their career is over. In a chat show hosted by Anupama Chopra Deepika Padukone accidentally revealed that Ranbir and Alia are getting married soon. When Vijay Devarakonda was asked about from which actor he would like to take advice from, he confessed his immense crushes on Deepika and Alia. Vijay said Deepika has got married and this was cut by Deepika saying that even Alia is getting married. To this Alia replied, ‘excuse me, why have you made this declaration?’ and to cover this up Deepika said, ’guys I made this up to see his reaction.’
So are they getting married? We have Deepika, Rajeev Masand revealing the wedding new on the other hand we saw Alia’s mother stating it to be a baseless new. To know if all these reports are true or rumour all we can do is wait till December, ultimately it is after or just before the release of their movie Brahmastra when we can know the truth. And if they are tieing the knot then it would be one of the Bollywood’s biggest and cutest marriage in which the girl gets to marry her long time crush.

With Alia’s mother denying it, it is entirely possible that it is nothing but an nervous Ranbir’s PR planting this article in Rajeev Masand’s column. Not having a single movie release in almost two years, may have made him jittery.